Many of the environmental and sustainability apps on the market that aim to help people reduce their carbon footprints do so in large part through offering the purchase of traditional carbon offsets. Since our founding, Zerofy has explicitly chosen not to offer these offsets to our users because we do not believe they offer a path towards sustained and measurable zero-carbon living.

We are firmly committed to helping our users understand their household carbon footprint and then transition to low carbon energy and products to reduce it. Our team believes measurable, additional actions are the best way to help our users reduce emissions and support the energy transition. We’ve built our product on this core belief. 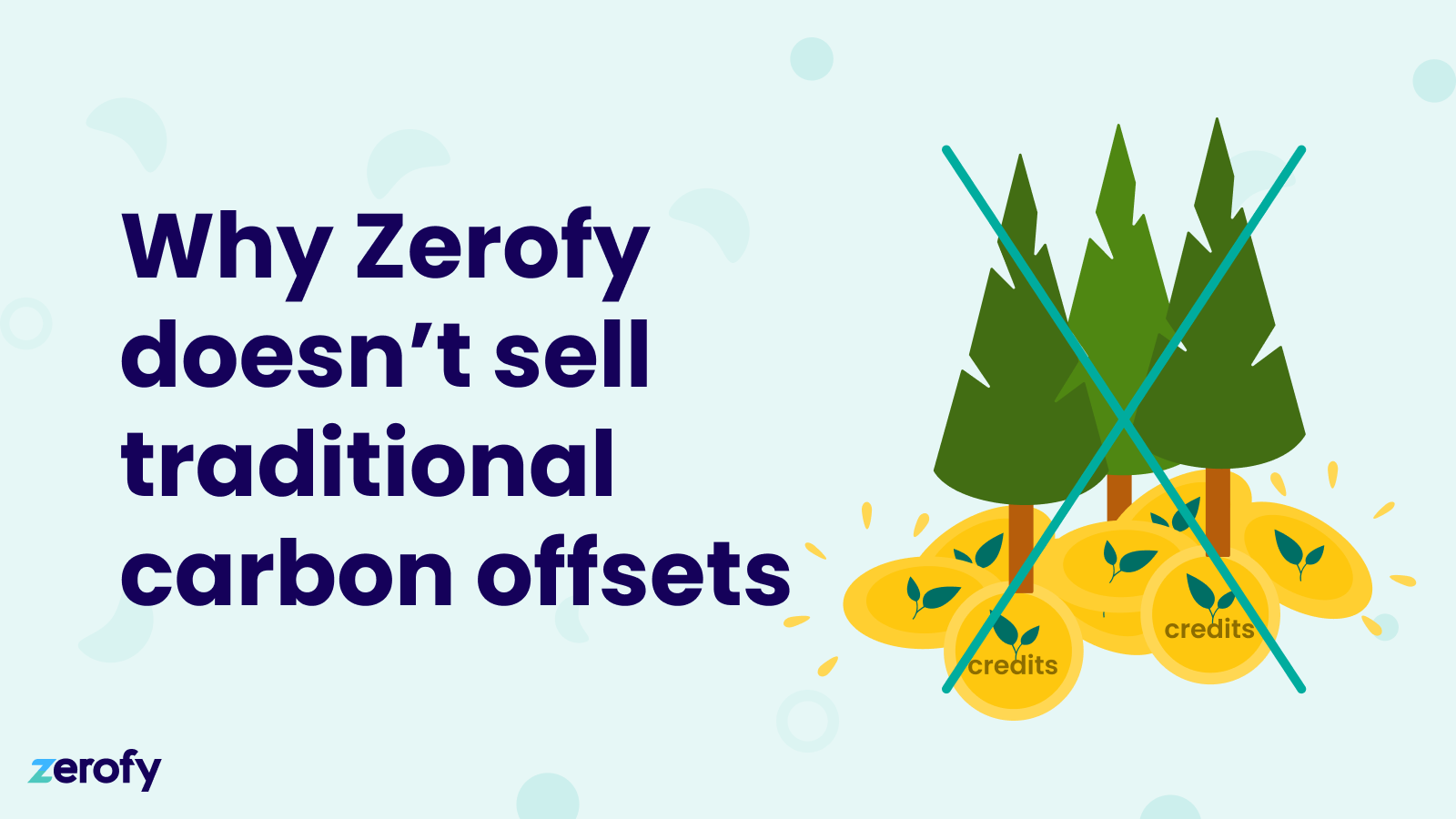 Before we dive in, let’s cover a few key definitions. Carbon offsetting is when an individual, government, or business pays to receive a credit for a certified unit of emissions reductions or removal carried out by another entity. The concept of additionality is a way to evaluate the degree to which an offsetting or removals project would benefit the environment beyond what would have happened anyway, without the funding from the offset program. Permanent carbon removal refers to activities that remove carbon dioxide (CO2) from the atmosphere and durably store it in reservoirs or products, like Direct Air Capture and Storage.

There are various risks associated with offsetting programs, like faulty or vague carbon accounting, the CO2 removed being released back into the atmosphere, and projects that harm local communities. Dubious accounting would mean that projects are presented as avoiding or removing much more CO2 than they actually do. There is also the problem of double-counting; if a carbon credit is not retired, there is the risk it can be sold again to another entity or used to offset other emissions. Some offsetting projects that focus on afforestation or reforestation can have significant positive benefits, but they are not permanent because the carbon sequestered by trees will eventually be re-released into the atmosphere due to tree decomposition or potential forest fires. Lastly, the exploitation of Indigenous communities in developing countries whose involvement in forest preservation is tied to the carbon credit market is a growing concern.

As with many industries, the offsetting world has credible organisations with high quality projects, but also ones that have been shown to vastly overstate or falsify their impact. In 2021, Bloomberg reported that the Nature Conservancy, the biggest environmental group in the world, sold meaningless carbon offsets to major companies like Disney and Blackrock. The Nature Conservancy sold offset credits for the protection of forests that were in fact not at any risk of being cut down. This meant these major companies could use the credits to subtract from the emissions they generated, and claim emissions reductions to their customers and shareholders. Recent investigations from Global Change Biology and ProPublica show that offsetting and forest preservation projects systematically overstate the amount of emissions they counteract.

Alongside the above risks and problems with offsetting, we also believe they don’t provide a sustained path forward. If households and businesses know their carbon footprint but solely rely on offsets as a mechanism to reduce emissions, there is a real missed opportunity to make high impact changes. Given that 70% of global emissions can be indirectly attributed to households, people have a lot of power to drive emissions reductions from their homes.

How Zerofy’s approach is different

All that said, Zerofy’s view is certainly not that planting trees, protecting ecosystems and rewilding are unimportant. On the contrary, these are vital and critical activities, and play an essential role in supporting diversity and protecting wildlife and habitats. We believe these actions should be supported and scaled—but not as a substitute for real emissions reductions, but rather as an addition. In other words, ideally such investments are carried out, but not directly offset against one’s own emissions, or only against a small part (say 10%).

In the Zerofy app, we focus on empowering users to reduce their carbon footprint as much as possible. We do this in a few ways:

See what actions your household can take

So, what does Zerofy do about unavoidable household emissions?

We’re not naive, and understand the reality that some household emissions are difficult to reduce. While our primary focus is reductions, we have included the option to purchase permanent carbon removal in Zerofy through Charm Industrial. Charm Industrial uses plants to capture CO₂ from the atmosphere, and then the biomass is converted into a carbon-rich liquid which is sequestered in geological formations. Other companies with technological approaches to permanent carbon removal include Climeworks (solid sorbent Direct Air Capture), Carbfix (permanent sequestration with mineralization), and Carbon Engineering (liquid sorbent Direct Air Capture).

These technologies are at an early stage and therefore more expensive than most traditional offsetting projects, and early investment is required to help them scale to a climate-relevant size. This is recognised by technology companies like Stripe and Shopify, who have both invested in permanent carbon removal companies. Additionally, it has been shown with technologies like solar that once scaled, cost comes down.

Offering the permanent carbon removal performed by Charm Industrial aligns well with the stringent criteria of the Oxford Net Zero Offsetting Principles. These principles, widely regarded as a high water mark, advocate for reducing your own emissions first, and shifting towards offsets that directly remove carbon from the atmosphere and provide long-lived, permanent storage. We think the permanent carbon removal offered by Charm Industrial is superior to traditional carbon offsets and a high-integrity option for reducing unavoidable emissions.

If you’re curious about trying Zerofy and seeing how we do things differently, you can download it for free in the iOS App Store. The app is currently available in Austria, Germany, Denmark, the UK, Norway, Finland, the Netherlands, Sweden, and Estonia. If you’re on Android or not in a covered country, please join our waitlist so we can prioritise our next launch—we’re expanding quickly!