Shared mobility concepts promise that they reduce the number of vehicles on the road, which is expected to have a positive impact both on the emissions from the production of vehicles, and also less space required for parking lots. While scooters and bikes are hoped to reduce the kilometers driven by cars overall, car sharing would mainly lead to more efficient usage of a smaller fleet of vehicles. If the fleet is electric, emissions from driving would also be reduced significantly.

Testing the user experience of Bolt car sharing and the VW ID.3

With mobile ride-hailing apps, scooter and bike sharing apps, and ultimately super apps that combine all these services into one single app, convenience for users has increased dramatically. First car sharing services back in the days required one to pick up a car key at an office. Luckily these days are long gone, and today a tap in an app is enough to reserve a shared vehicle. Reason enough for us to test electric car sharing in real life. 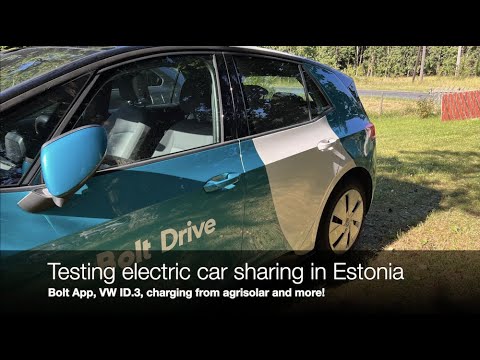 The cost for the whole day rental and 320km driving was 95 Euro. Granted, not cheap. But my ride probably didn’t fit the typical intended usage pattern, which would be more around urban centers and for shorter periods.

Benefits and challenges of an electric car sharing service

As pointed out above, car sharing in general can reduce the number of cars on the road (see next section for some data on that). Electric car sharing can have a particularly positive effect, as the driven miles are zero tailpipe emissions. Theoretically, a car sharing network can control the electricity that is used for charging to some extent (pure solar power, etc.) which would further reduce emissions from use. Finally, as emissions for the production of electric vehicles is higher than for gas vehicles, sharing ownership and producing fewer cars is particularly beneficial. Finally, an electric car sharing service could also be a way for folks who still prefer to own a car to test before buying an electric vehicle.

On the flip side, maintaining a fleet of electric vehicles for car sharing is likely more challenging than a fleet of gas cars: due to the long charging times, users would probably avoid vehicles with a low state of charge. And since in a floating system cars can be parked anywhere, they are probably usually not parked at a charging station. Which then probably requires additional incentives to charge vehicles, or the car sharing service has to collect and charge cars with a low state of charge.

This week Bloomberg BNEF reported that worldwide annual car sales are expected to peak in 2036, ending more than a century of growth. Various factors are driving this “peak car” moment, one of them being car sharing.

And the science supports the hypothesis that car sharing reduces private car ownership: A 2020 study carried out in 11 European cities found that household car ownership decreased after joining a car sharing service, and estimates that each shared car could replace up to 20 private cars.

Other research came to similar conclusions, for example, a 2017 paper from the Netherlands reports “Car sharers own 30% less cars than prior to car sharing” and that “the shared car mostly replaces a second or third car.”

And a 2016 study in Switzerland found “that (due to their membership) 6% of the free-floating car-sharing customers reduce their private vehicle ownership.”

So the evidence that car sharing can reduce car ownership is pretty conclusive[1]. Electric car sharing further reduces emissions and can play a major role in driving a low-carbon lifestyle, especially in and around urban areas.

If you’re interested in understanding your household’s carbon emissions from mobility and other aspects automated and in real-time, please try our app, Zerofy. Not only is it the easiest way to track your transportation trips and emissions, but it also gives you useful tips and introduces great products to lead a lower-carbon life.

1. Interestingly the jury is still out on the impact of some other shared mobility services, such as electric scooters. A 2022 study from ETH Zurich found that, for the example of Zurich, scooters increase emissions, rather than reducing them. This is, because they mainly replaced lower carbon alternatives of transportation such as walking or public transport, rather than car rides. ↩