The electrification of everything: opportunities in the decarbonisation of energy production and storage 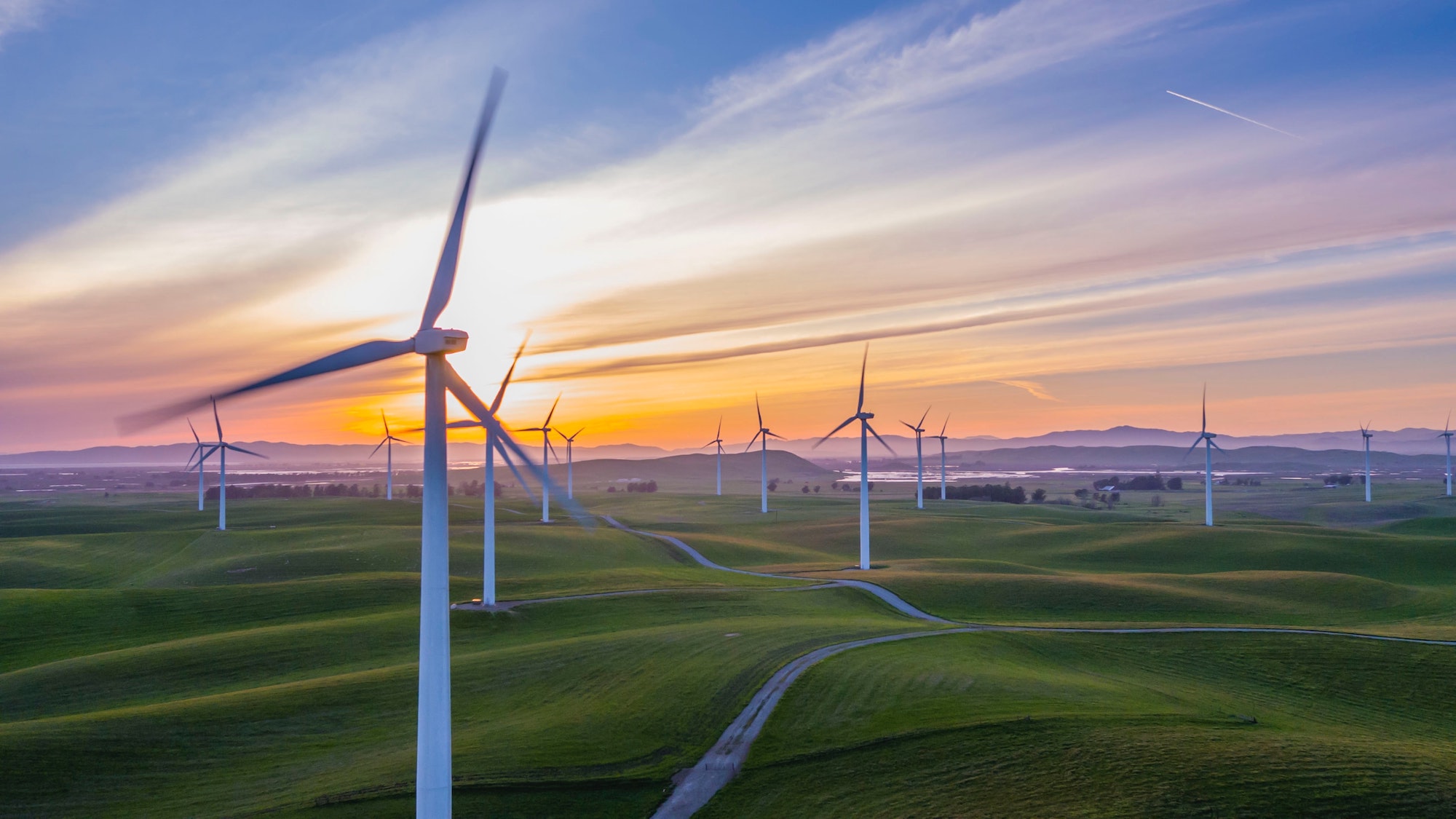 Photo by RawFilm for Unsplash

This is the first post in a series on the opportunities presented by tackling climate change. In this article we cover renewable energy production and storage. Future articles will address transportation, food, etc.

A key pillar for the decarbonization of all aspects of our life is to move much of our energy consumption to electricity. As will be covered in future articles that include aspects such as transportation, home, and industry. If we move much of the energy consumption to electricity, it also means that the electricity production needs to be decarbonized at the same time, and opportunities in this transition process is what will be covered in this post.

It should not come as a surprise that solar and wind will play a dominant role in renewable energy production. The reason is that the costs of core technology required for these forms of energy has plummeted. As an example, the price for solar cell modules is almost one-tenth of what it was only 10 years ago, as can be seen from the chart below.

As a result, the cost of utility-scale solar energy is dropping. In fact, in many places across the world, power from utility-scale solar is already the cheapest form of energy, cheaper than fossil fuels. And electricity from onshore wind farms is even cheaper than solar. The plots in the chart below shows the (levelized) cost of electricity (LCOE) for wind and solar as it developed over the last 10 years. The orange band shows the range of costs for fossil fuels, and it can be seen how solar and wind fall below that band in the last few years: 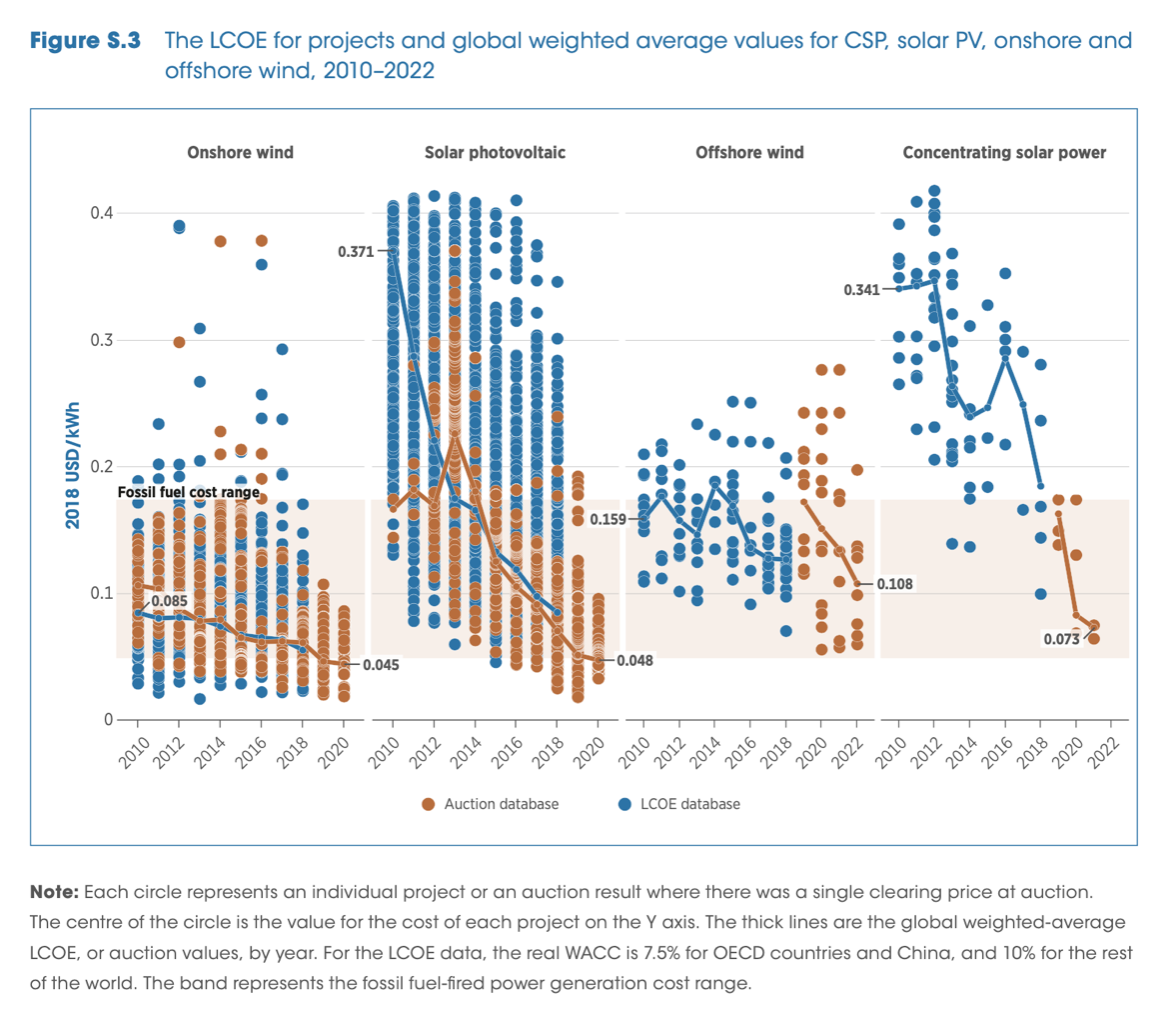 In a few years, solar will likely be the cheapest form of electricity everywhere, according to a 2019 paper in the journal “Progress in Photovoltaics”:

With cost decreasing, the installed capacity of solar has been increasing, and hopefully, the projected cost reductions will lead to further acceleration of the deployment of solar:

Figure source: IEA PVPS report 2018   Wind has seen a similar development and growth like solar. Details are omitted in this post, however, they may be covered in a follow-up post.

(Another aspect that is not covered in this article is residential solar. We will address this topic in part 3 of our series, which deals with housing and utilities.)

Combining solar and wind, the world’s energy needs can be covered without fossil fuels, and most likely also without nuclear power. While this is a gigantic challenge (Smil, 2017), but various scenarios (a few examples: [a],[b], [c]) have been calculated to show that it is not impossible at all.

Why no nuclear? Existing nuclear power designs probably have no future because of their cost and unpopularity due to the unsolved problem of storing nuclear waste and the risk of a major accident like Tchernobyl or Fukushima. That being said, research into new forms for nuclear energy with government projects (for example the massive ITER fusion research project) or startups such as TerraPower (with Bill gates as a prominent investor) and Nuscale is worthwhile. However, since it remains unclear if these technologies will work, and if they do, it may still take many decades to commercialize and deploy them. In contrast, solar and wind can be deployed rapidly, at low cost, already today.

The biggest drawback of renewables such as wind and solar is, of course, that they are intermittent. Which brings us to the topic of energy storage.

Storing (electric) energy simply means converting it into another type of energy for storages via mechanical or chemical means.

Mechanical means include storage as gravitational potential energy, most common in the form of classic pumped hydropower, as applied for many decades already in locations such as Switzerland or Norway. The worldwide total available storage capacity is approximately 9000 Gwh. (The theoretical potential of such storage sites is by far not tapped.)

Energy Vault, a Swiss American startup backed by tech veterans such as Bill Gross and Bill Gates, applies the same principle of potential energy but lifts and stacks concrete blocks with cranes instead of lifting water with pumps. There is a wide variety of other mechanical storage systems including trains on a slope, storage in gigantic flywheels, etc. Many of them  are, however, not very scalable.

Chemical means of converting and storing energy include batteries and “power-to-x” technologies, where the X stands for various gases or liquids.

For batteries, Lithium-ion in particular, has become rather widely applied for domestic (e.g. Tesla Powerwall, Sonnen and utility-scale storage (Tesla PowerPack and Megapack famous for its 129 MWh application in Australia). These battery installations are mostly suitable for overnight storage up to a couple of days.

Power-to-gas or power-to-fuel storage approaches allow for long-term storage of energy and transportation of energy over long distances in pipelines, ships, or vehicles. Typical gases produced are hydrogen or methane, and there are also several synthetic liquid fuel types. (See also below, transportation section). One fundamental issue that could potentially be solved with Power-to-X is the seasonal storage of energy, mainly for the far-northern hemispheres, where days in winter are short. In these hemispheres, solar will produce almost no energy in winter, however, in the summer the days are much longer than closer to the equator. Besides solor, wind surplus energy can of course also be stored with power-to-X. As an example, Germany’s gas infrastructure can store 360 TWh of energy (230TWh in gas storages, and 130 Twh in the network itself) which is a bit more than 1 month of the overall primary energy needs of Germany (including all sectors such as electricity, transport, etc.). (Note that this is equivalent to about 3000 battery projects like the Tesla project in Australia.)

Furthermore, this way electricity could also be generated in southern areas with high solar yields and transported via gas or fuel pipelines throughout continents. This can be advantageous over electricity grid transmissions, as the gas pipelines are built out and connected at least as well as long-distance transmission electricity grids. 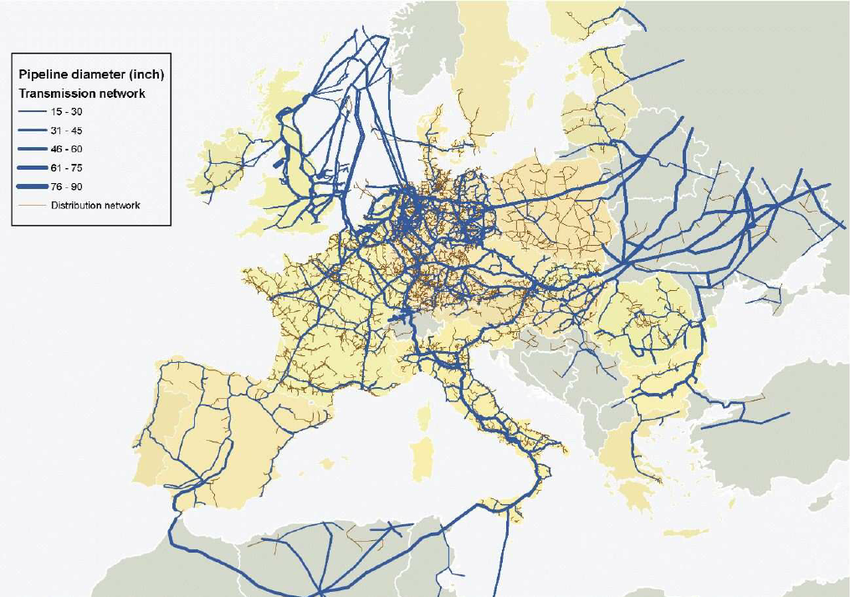 It is important to note, that any storage of electricity increases its final cost. There are storage and conversion losses and operating and depreciating the storage infrastructure leads to costs that need to be accounted for. In other words, electricity that is stored after production is more expensive than electricity that is immediately consumed. This means: a) whenever possible electricity (from renewables) should be consumed immediately. And b) the costs for a kWh cited in the introduction could increase by the storage cost, which means the electricity generated from renewables has to be so much cheaper than fossil, that it also allows for including the storage costs. An incredibly simplified calculation: if conversion from solar electricity to gas and back is about 50% efficient, the cost of solar would have to fall up to another 50% to be competitive with fossil (which could happen as soon as in 5-10 years based on historic rates.)

Note that besides using electricity (obtained from solar or wind) to produce gas for storage, there are also methods to generate gas such as methane directly from sunlight. Similarly, fuels can be generated from sunlight directly (will be covered in the upcoming article about transportation) or process heat for industrial applications (which will be covered in an upcoming article on transitioning industrial power needs).

In summary: despite the gigantic challenge of moving our energy needs to rely on electricity, and at the same time transitioning electricity to be sustainable, opportunities are abundant and progress is rapid.

This concludes our article on energy production and storage. The next article covers the progress and opportunities in sustainable transportation.

If you’d like to receive updates on these articles and on zerofy, please subscribe to our newsletter.